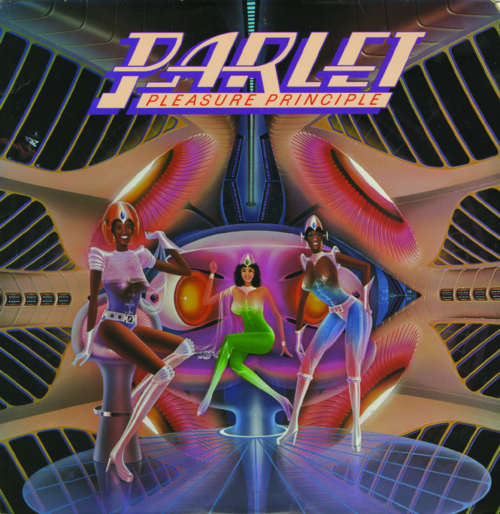 Of George Clinton’s two girl groups, The Brides of Funkenstein commanded the lioness’ share of attention, but Parlet was the funkier of the two; in Clinton put it, “sexual satisfaction guaranteed, that’s what this group is all about!” Parlet’s roots actually went way back in the Parliament/Funkadelic cosmology; singers Jeanette Washington and Debbie Wright were the first female members of the band, and the third member of the trio, Mallia Franklin, introduced Uncle Jam to Bootsy Collins.

Both Parlet releases were production vehicles for Clinton and his rotating cast of characters, including Collins, Glenn Goins, Bernie Worrell, Fred Wesley, Gary Shider and other members of the Mothership. Which is hardly a bad thing; any Parliament/Funkadelic fan is going to want this, especially since it was only briefly out on CD in Japan in the early ’90s. Our Real Gone reissue of this complete 1978 release sports liner notes from Parliament/Funkadelic’s own former Minister of Information, Tom Vickers, plus memorabilia from his archive and a fresh remastering job by Maria Triana at Battery Studios.