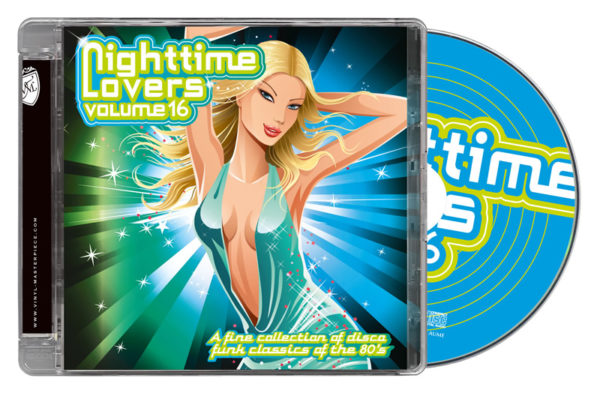 Volume 16 of this very popular compilation series. Nighttime lovers vol. 16 is as usual with highly in demand eighties disco/funk classics with amazing 12-inch. Such as Carl Carlton – Private Property
Carl Carlton always said that he would be the new Stevie Wonder, but in 1985, at the age of 33, this was one of the last records he has made!

While Stevie Wonder at the age of 62 is still going strong. This song was produced by Allen Jones, best known as producer of the Bar-Kays and Chocolate Milk. Cool Runners – Checking out. Absolutely the most sought record of this Brit-Funk band. Great laid-back song from 1982 with great vocals from a singer unknown to us. If anyone knows who she is, please let us know! Dunn & Bruce Street – Shout for joy. Delicious recording of Dunn Pearson, Jr. and Bruce Gray from 1982. Dunn Pearson, Jr. was keyboardist, composer and arranger and has worked with groups such as The O ‘Jays, Stephanie Mills, Teddy Pendergrass, Stevie Wonder and Mtume.

They have only released one album “Official business” and around the time of the release Bruce Gray unfortunately died. Scott White – I don’t understand it. Very little is known about this artist, he has only released one album and one 12inch. The production of this song from 1988 was in the hands of Rahni Song, known for his work including Dayton, Beau Williams and Najee. The real name of Rahni Song is Rahni P. Harris, Jr.. This remix was made by Ron Banks.

Stanley Clarke – Heaven sent you Very nice downtempo track from 1984 by bass player Stanley Clarke in collaboration with former lead singer of Shalamar, Howard Hewett. The song features a great intro, great vocals and a wonderful break. In short, a worthy ending of this compilation.