ESTHER PHILLIPS – From A Whisper To A Scream EXPANDED 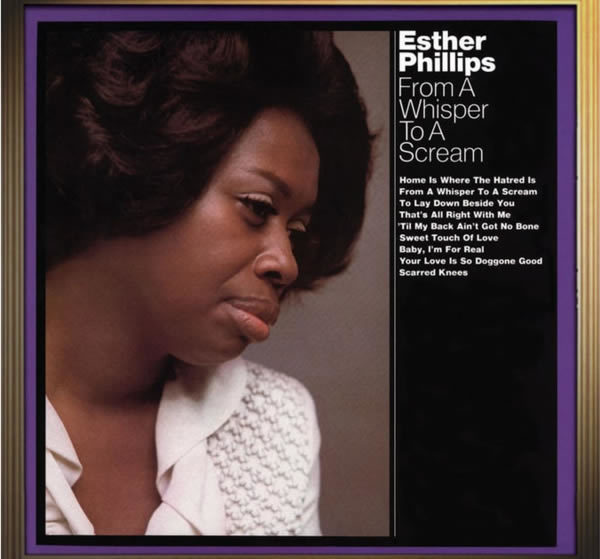 ESTHER PHILLIPS – From A Whisper To A Scream EXPANDED

Justifiably hailed as her ‘career’ album, FROM AWHISPER TO A SCREAM re-established the late Esther Phillips as a prominent soul and jazz artist in 1972, starting her most fruitful period as an international chartmaker through her five-year association with jazz industry veteran Creed Taylor’s Kudu Records. Originally a chart-topping child star with the Johnny Otis band in the early ‘50s, Little Esther battled drug addiction off and on throughout the ‘60s during which she achieved some success with ‘Release Me’ (1963) and ‘And I Love Him’ (1965). Esther recorded some critically acclaimed albums for Atlantic before entering rehab in 1969.

The sessions for FROM A WHISPER TO A SCREAM in December 1971 found her surrounded by stellarplayers such as Gordon Edwards (bass), Bernard Purdie (drums), Airto Moreira (percussion), Cornell Dupree and Eric Gale (guitar), Richard Tee (keyboards) and labelmate Hank Crawford (on sax on selected tracks).Handpicking the material herself, Esther included some R&B hits of the time – The Originals’ ‘Baby I’m For Real,’ Eddie Floyd’s ‘’Til My Back Ain’t Got No Bone’ – alongside two songs penned by Allen Toussaint, including the stirring title track. The album’s most notable cut was her true-to-life version of Gil Scott-Heron’s ‘Home Is Where The Hatred Is,’ which she was initially reluctant to record given its direct references to heroin addiction. Originally reissued in 1988 with four bonus tracks, this expanded edition has been out of print for several years.

Notes by SoulMusic.com founder David Nathan include quotes from a 1973 interview with Esther.
*