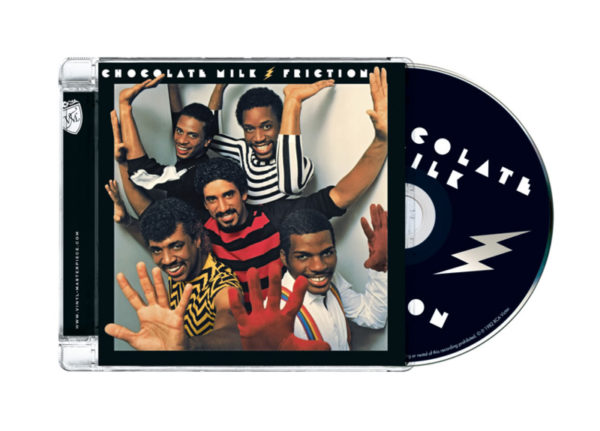 Chocolate Milk – Friction. Originally Chocolate Milk was a jazz quartet from New Orleans, but the eight members of Chocolate Milk (Amadee Castenell, Jr., Dwight Richards, Joseph Smith, brothers Ernest and Robert Dabon, Frank Richard, Mario Tio and Kenneth Williams) decided to become an R&B band like their idols the Bar- Kays and Kool & The Gang and hopefully sell records on an international level. They came to the attention of producers Allen Toussaint, Marshall Sehorn, the owners of Seadaint Studios. The long walk to fame was beginning. Their first release was Action Speaks Louder Than Words. The thick slab of chunky funk which opens this disc encouraged RCA to sign the band. The song went on to become a Top Twenty R&B hit. Further chart successes followed with the song Girl Callinâ€™, a very radio-friendly song that spent 16 weeks on the charts hitting a respectable #14 position. This level of success was not unnoticed by RCA, who appointed a new producer and a larger recording budget.

Hoping to duplicate the pop magic that Eumir Deodato was weaving with Kool & The Gang, mega-pop producer George Tobin ( Smokey Robinson, Natalie Cole) was assigned the task of bringing Chocolate Milk the superstar status for which they seemed destined. But alas, as many of these forced marriages of disparate styles go, this one did not work. Some good, music came from these sessions (check out â€˜Hey Loverâ€™ for example) but a blockbuster hit proved elusive, and the next level seemed out of reach.
Allen Jones became their new songwriter and producer and was known for his work with the Bar-Kays. Jones incorporated current musical trends without losing the basic funk, a skill that had fallen by the wayside when the band parted ways with Toussaint. It was now time to add that Nâ€™awlins funk to some Memphis stew â€“ a heady brew indeed. This time, the marriage worked.

At the Memphis sessions, the funk truly flowed. Blue Jeans was the first of these groovy gems, spending 18 weeks on the R&B chart, peaking at #15. Further album collaborations with Jones followed. This was now a band that was strutting its stuff the way they were meant to. Whoâ€™s Getting It Now from the album Friction a dance club fave presented here in itâ€™s rare remix, shows a more edgy but no less funky side of this creative unit.

Today, you can hear echoes of Chocolate Milkâ€™s sound in acts like the teen sensation Immature, who sampled the track â€˜Girl Callinâ€™ for their top ten soul hit â€˜You Got It. â€™ New Revolution soul bands like The Roots, Tony, Toni, TonÃ© and Mint Condition all cite Chocolate Milk as an influence. Many more credited and uncredited hit records are built from the thick but classy grooves you hold in your hand. But enough reading. Go listen, or better yet, invite a few of your friends over to listen and check the timeless flowâ€¦sweet as funk can be.