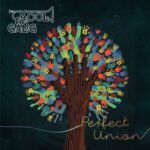 The use of “Jungle Boogie” in 1994’s Pulp Fiction brought a new generation of fans to the group, and David Lee Roth invited them to open for Van Halen’s A Different Kind Of Truth tour in 2012, after catching their set at Glastonbury. 2016’s Kool & The Gang And Friends! Had them collaborating with artists including Sean Paul, Angie Stone, Redman, Jamiroquai, Lisa Stansfield, and more. Kool & The Gang have won multiple Grammy® and American Music Awards, have been inducted into the Songwriters Hall Of Fame, and have sold over 70 million records worldwide! Over five decades since their formation, Kool & The Gang returns with their 25th studio album – Perfect Union. Produced by Ronald Khalis Bell (a founding member of the group who passed away in 2020. So, celebrate Kool & The Gang’s sixth decade of hit making with Perfect Union!