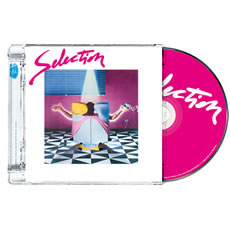 It was not until the summer of 1982 before their first and only album was released on the Full Time Records label. For the album recordings, producers Claudio and Franco Donato joined forces with writers/arrangers Roberto Negroni, Naylon and Van Patterson. And together with leadsinger Van Earl Patterson and backing singers Gail Berry, Orlando Johnson and Patty Johnson they recorded eleven tracks.

â€œIâ€™m So Gladâ€, â€œRide The Beamâ€ and â€œRebel On The Runâ€ became favourites among the many soul-funk lovers all over the world and the album and the 12 inches became collector items over the years.

This re-issue on PTG Records is completely digital remastered from the orginal mastertapes. And finally is this piece of classic Italian funk available in itâ€™s full gloryâ€¦. including remixes/long versions of the single tracks.
We are very glad to present you the 1982 album Selection on CD!