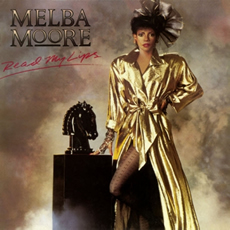 This meshing of “feels” and styles is apparent from the get-go on the album’s namesake and first single, “Read My Lips.” The driving number not only reached #12 on Billboard’s R&B chart, but also garnered Miss Moore a Grammy nomination — her fourth — in the Best Female Rock category. Producer Keith Diamond (now deceased) played live drums over his drum programming, while Eddie Martinez contributed the “rock guitar.”

Keith produced seven of the album’s nine cuts (five of which he wrote or co-wrote), including the follow-up single releases, “When You Love Me Like This” (featuring Lillo) and “I Can’t Believe It (It’s Over).” “He demonstrated great acumen for music: both the song and how it should be delivered,” remembers Zack. “Not unlike Kashif, who also played instruments, Keith was more into directing people on the particular way a song should be done. So, he got great musicians to work with him, and his communication skills got the best out of all of them. He also brought a different set of international musicians to the mix whom we might not have known otherwise.”

Remastered from the original tapes. Including Bonus Tracks.