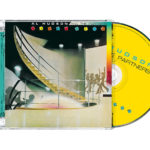 Happy feet from Al Hudson and the Partners was one of the forerunners of what later became the very successful band One Way. As the title track suggests this album gave us happy feet and shot the group in 1979 into it’s biggest success yet.

A generally decent soul/funk/disco outing. Happy Feet ranges from snappy dance numbers like “Rockâ€, “In the Basement” and the hit single “You Can Do It” (added also to the album as 12â€ bonus track) to romantic ballads and slow jams such as “I Don’t Want You to Leave Me” and Peabo Bryson’s “Another Love Song”. The singer who stands out the most on this album is, without question, Alicia Myers; a passionate, big-voiced goddess who went solo in the ’80s, and is best known for her 1981 hit “I Want to Thank You”.

Arguably, Myers was the best vocalist that Hudson’s outfit ever had, which is ironic when you consider that One Way had some of their biggest hits after her departure. Happy Feet isn’t the group’s best or most essential album, but it’s enjoyable nonetheless, and Myers’ participation makes it worth for PTG to re-issue this album and to add it to our previous releases of One Way and Al Hudson.