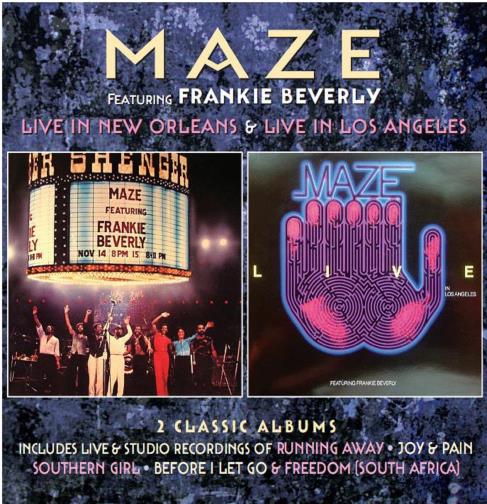 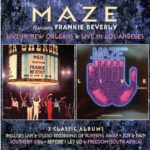 At last two of the greatest R&B live albums ever recorded are available on one package. Maze featuring Frankie Beverly were known for their fantastic live performances, and releasing two live albums during their career showcased that talent.

“Live In New Orleans” was recorded 1n 1981 and “Live In Los Angeles” was recorded five years later in 1986. These two albums feature all of Maze’s best tracks ‘Changing Times’, ‘Running Away’, ‘Happy Feelin’s’, ‘Southern Girl’ and of course the bands anthem ‘Joy And Pain’ to name but a few. These two albums also featured a side of new studio recordings which are also available on this package including the US #1 R&B single ‘Back In Stride’, plus the R&B hits ‘Running Away’ and ‘Before I Let Go’. The “Live In New Orleans” album was certified Gold in the U.S. and crossed over to the Pop Chart reaching #34, but the album went Top 3 in the U.S. R&B album chart.
Live In Los Angeles” reached #12 in the U.S. R&B album chart.

This unique package released on Robinsongs features liner notes by Charles Waring who writes for MOJO and is the co-founder of www.soulandjazzandfunk.com.
*

DISC ONE: LIVE IN NEW ORLEANS