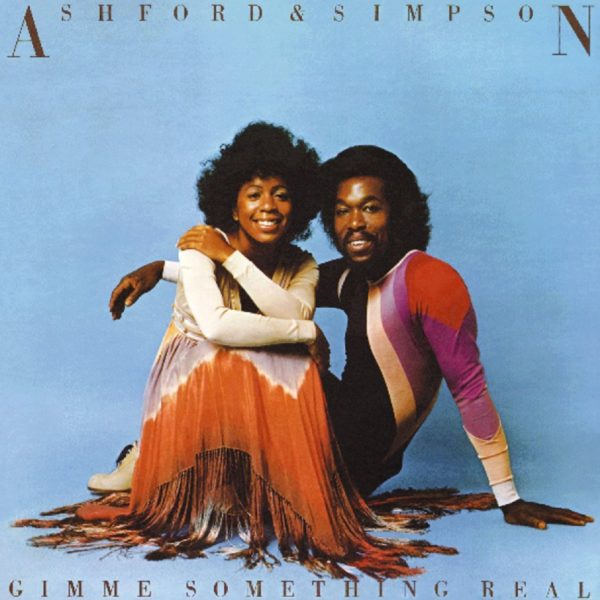 Having contributed to reshaping soul music of the mid- 1960s to the early 1970s via other recording artists (notably Marvin Gaye & Tammi Terrell, Aretha Franklin, Diana Ross, Chaka Khan, The 5th Dimension), Nickolas Ashford & Valerie Simpson were a long established song-writing success before expanding on this as a recording duo in 1973. Valerie would release two wonderful records albeit to limited commercial success before the duo branched out together with their Warner Bros. debut GIMME SOMETHING REAL. Following on from the joyous pop formula they had perfected during their run of song-writing with Motown, GIMME SOMETHING REAL sees the duo progressing further with a quiet storm template that would partially set the standard for future releases.

First single ‘I’d Know You Anywhere’ (R&B #37/Pop #88) establishes the beautiful low-key affair that this record is with Ashford & Simpson maintaining their sophisticated vocal interplay. The incisive ‘Have You Ever Tried It?’ (R&B #77) remains one of their most slept-on songs, not only because none of the further songs the duo would go on to release reiterated the kind of sexual confidence going on here but notably this song best represents an album that is incredibly distinct from their earlier body of work. Final single ‘Bend Me’ (R&B #73) was in fact released in the middle of their promotional period for their sophomore Warner Bros. album I WANNA BE SELFISH which saw the duo reintegrating their Motown formula within their quiet storm template. As the album’s opening track, ‘Bend Me’ reaffirms Ashford & Simpson’s position in soul music, even more so given the unexpected deviation from what is arguably one of the most spectacular eras of pop music during their time at Motown.