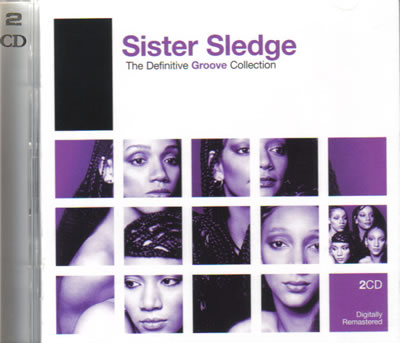 Sister Sledge were born and raised in West Philadelphia and began singing in local Philadelphia churches like the Second Macedonia Baptist Church. They were discovered by Charles Simmons and entered the UK Singles Chart in 1975 with “Mama Never Told Me” and “Love Don’t You Go Through No Changes On Me”. Their career went into decline before it revived under the magisterial production skills of Nile Rodgers and Bernard Edwards of Chic. This association gave them their biggest successes which came in 1979: the popular disco anthems “We Are Family” (#1 R&B, #2 Pop in the U.S.) and “He’s the Greatest Dancer” (#1 R&B, #9 Pop in the U.S.) Both songs were included on their eight song 1979 album We Are Family. Their follow up album was 1980’s Love Somebody Today, which included the songs “Got to Love Somebody” (#6 R&B, #64 Pop in the U.S., #34 in the UK) and “Pretty Baby”.

Switching to producer Narada Michael Walden in 1981, they released the album All-American Girls, yielding two hits (the title track, which reached #3 R&B and #79 Pop in the U.S. and #41 Pop in the UK), and “Next Time You’ll Know”, which reached #28 R&B in the U.S.) The sisters continued singing new material throughout the 1980s and 1990s. They achieved an international #1 hit with “Frankie” in 1985 (#1 in the UK for 4 weeks); surprisingly the follow-up single, “Dancing on the Jagged Edge”, failed to make the UK Top 40. In 1992, Kathy left the group and recorded the solo album Heart. The group continued to perform with her and recorded the album African Eyes in 1998 as well as the Live in Concert album in 1997. In 2004 they headlined the International Food and Wine Festival at the Epcot theme park. In 2003, Debbi and Joni performed with two other girls in the PBS special, My Music: 70’s Soul Superstars, which is also available on DVD.