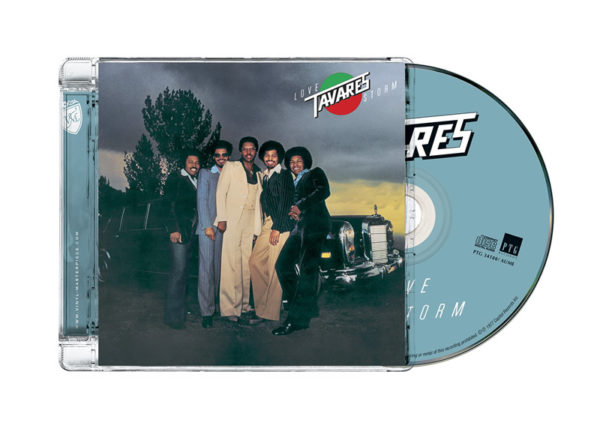 The Tavares brothers’ debut album, Check It Out, established them as soul stars, and when they delivered their fourth album, Sky High!, in 1976, they became disco stars as well — at least for a few years. The man Tavares has to thank for its popularity in the disco world from 1976-1978 is Freddie Perren, who made sure that Sky High! had both soul appeal and disco appeal. Perren did the same thing when he produced Tavares’ fifth album, Love Storm released in 1977 on the Capitol label.

Perren brings a fair amount of disco gloss to the major hit “Whodunit” with its lyrics pleading to several 1970’s TV detectives (Baretta/Kojak â€¦) and the Latin-tinged “Watchin’ the Woman’s Movement”, but the album also has plenty of unapologetic soul crooning. Listen to the ballads “Keep in Touch”, “Out of the Picture” and “Fool of the Year”, or a heartfelt cover of Jesse Belvin’s 1956 doo wop hit “Goodnight My Love”. Also memorable is Tavares’ cover of the Jim Weatherly song “The Going ups and the Coming Downs” which Gladys Knight & the Pips had recorded in 1974. The album is in the style Perren had used on 1976’s Sky High!, with a mixture of R&B material and radio-friendly disco-oriented tracks.

Lead single “Whodunit” became the group’s third R&B chart-topper, also reaching #22 on the pop chart and #5 in the United Kingdom. “One Step Away” also made the UK top 20, but “I Wanna See You Soon”, featuring Capitol label-mate Freda Payne, stalled just outside the Top 50, breaking a run of five consecutive top 25 singles for the group in Britain. The album peaked at #15 on the Billboard R&B chart and #59 on the pop chart. Love Storm wasn’t Tavares’ most successful album, but it’s a decent, satisfying effort that the group’s hardcore fans will enjoy and certainly worthwhile for PTG to re-issue.