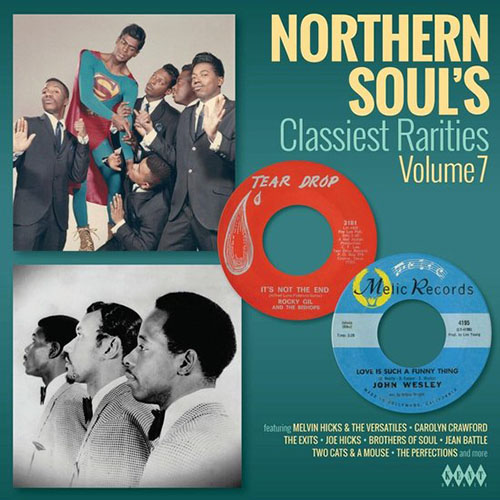 This latest episode of the high-quality end of the Northern Soul world is as varied as the scene has become, featuring manic funk, Detroit grooves, doo wop-inspired ballads, neo-Motown and pure soul stompers.

Los Angeles features strongly throughout. As a taster of the pleasures to come over the next couple of years, the opening tracks by ex-Motowners Carolyn Crawford and Kim Weston, along with the Joe Buckner & Major IV number, are from Mickey Stevenson’s late 60s Los Angeles operation; and the Lovers’ acetate-only ‘She’s Supreme’ and John Wesley & the Four Tees’ stomping version of the Williams & Watson LP track ‘Love Is Such A Funny Thing’ were recorded under the aegis of the city’s great arranger Arthur Wright.

Researching the tape vaults during lockdown has proved fruitful. The first version of Claude Huey’s ‘Why Would You Blow It’ by the unknown Isaiah Smith was discovered among the Galaxy tapes, as was the Brothers Of Soul’s ‘I Need Your Love’ – any previously unheard track by this redoubtable outfit is big soul news. I had originally thought that Buck Ram’s group Two Cats & A Mouse would be 50s-sounding, like most of his acts, but ‘Love In My Heart’ proved to be a classy cover of the Oracles’ 1967 rarity on OM.

From Milwaukee, the Badger State, we have two little-known 1963 recordings from the Cuca label. ‘You Don’t Care’ by the Esquires (aka Betty Moorer’s brothers’ group the Ambassadors) first appeared on “Badger A-Go-Go”, a compilation album issued on Cuca’s Night Owl subsidiary in 1968, while Harvey (Scales) & Seven Sounds’ beat ballad ‘It’s Midnight’ was finally made available as a download-only in 2020.

Jack Ashford’s influence is also strong. ‘Crazy Things’ by the unknown Joe Douglas, one of Jack’s earliest productions, was cut in Philly with a Motor City backing track. Jack’s Pied Piper set-up produced the Hesitations’ ‘Soul Kind Of Love’, the second 45 from their superlative “Soul Superman” LP, and his later work with Detroiters Lorraine Chandler and George Rountree is represented by Philly singer Ray Gant’s update of Eddie Parker’s ‘I Need A True Love’, and the Family Brick’s vocal group version of ‘I’ll Fly To Your Open Arms’, which Jack sang on his “Hotel Sheets” LP.

Other soul legends include Major Lance with ‘Girl, Come On Home’ (the original flip of ‘Since I Lost My Baby’s Love’) and the Exits’ ‘Under The Street Lamp’, which epitomised the aspirations of black street corner vocal groups. Joe Hicks’ ‘Don’t It Make You Feel Funky’ is adrenalin-driven soul, adored by the Northern Soul crowd. Rocky Gil’s ‘It’s Not The End’ and Little Nicky Soul’s ‘You Said’ are both mega-money items, but the rarest and most-desired track has to be ‘The Intruder’ by Melvin Hicks & the Versatiles, which was thought to exist only on acetate but is actually a missing number on a collectible soul label – all will be revealed.