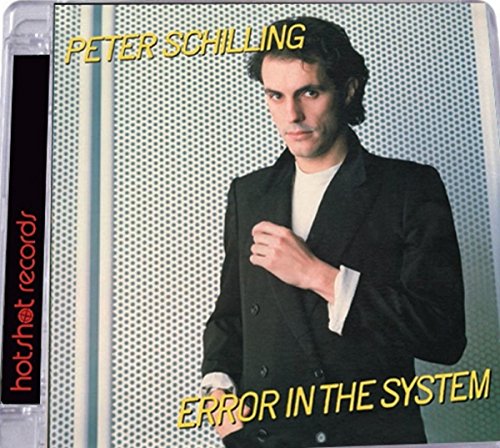 By the early 1980s, new wave had edged closer to bombastic pop than its punk origins, no doubt influenced by David Bowie’s shift from new wave pioneer of the 1970s to his New Romantic pop of 1980. Furthermore, the song was an answer to Bowie’s Space Oddity. Peter Schilling’s debut album ERROR IN THE SYSTEM actually arrived a year earlier in Germany (FEHLER IMSYSTEM) (1982) before Elektra released the record in English. What is even more surprising is the durability the record had given how fleeting new wave pop could be in terms of commercial presence. ‘MAJOR TOM’ may have provided Peter with the best hook to gain an international audience but the album boasted even more melodic (and melancholic) anthems. ‘ONLY DREAMS’, ‘LIFETIME GUARANTEE’ and ‘I HAVE NO DESIRE’ are also highlights.

A biting criticism of the U.S.A.’s inflated capitalism of the 1980s, the lyrics are easy to overlook given how upbeat the song sounds. It’s this dichotomy that elevates the album from being defined by ‘MAJOR TOM’, Peter Schilling’s only release with international success. This HOT SHOT RECORDS edition of ERROR IN THE SYSTEM also features a wealth of bonus tracks, including original versions from the album’s German release as well as 12” mixes of ‘MAJOR TOM’ and the albums second single ‘DIE WUSTE LEBT – THE NOAH PLAN’.

HOT SHOT RECORDS is thrilled to present this expanded and remastered edition of ERROR IN THE SYSTEM in a deluxe super jewel case with a brand new interview with remixer John Luongo as well as nine bonustracks.
*