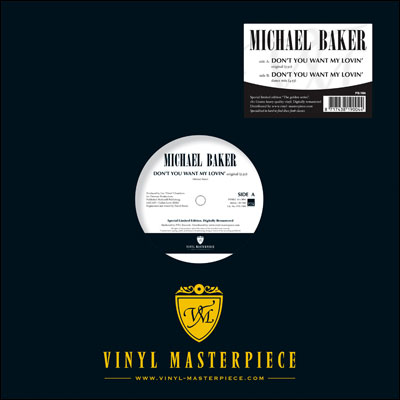 Michael Baker’s melancholic ‘Don’t You Want My Lovin’ is a legendary track that got released in 1984 on three different labels; Premo Records, JDC Records and Passion Records. The Premo was the first issue and is by far the hardest to find, followed by the Californian JDC and Passion Records from the U.K.

What makes this Vinyl-Masterpiece re-issue very interesting is that it has the original version on the A-side. This super funky monster with awesome synthbass was only released on the Premo issue and not many people know it! The ‘well-known’ dance mix with its fabulous intro can be found on the B-side. Michael Baker is a very talented Yamaha percussionist who drummed for famous jazz artists and later became Whitney Houston’s drummer. That Michael Baker also possesses a good voice is demonstrated on this cool re-issue distributed by Vinyl-Masterpiece. Worth the buy because that original version will definitely blow your mind.

Out now on PTG Gold. No further comments needed: get it now!