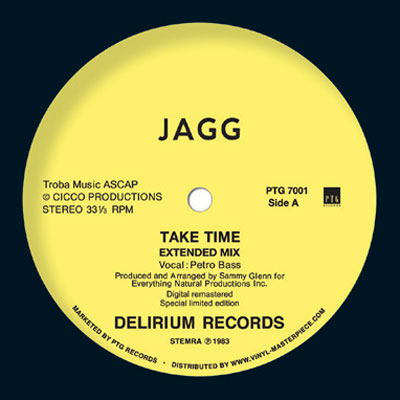 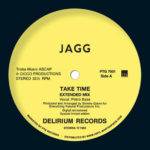 Jagg has always been one of the most wanted and looked after 12 inches among soul/funk record collectors. ‘Take Time’, produced and arranged by Sammy Glenn, is a great track with funky guitar riffs, floating synths and features vocals by Petro Bass.

In 1983 The record came out on Delirium Records, a U.S. label that released some other very rare tracks such as Neddy Smith’s ‘Give It Up’ from 1982 (which also has been re-issued by PTG Records and exclusively distributed by Vinyl-Masterpiece). ‘Take Time’ was originally released as a one-sided 12 inch only, with a quite short 4 minute version.

The re-issue however, contains also a never released 6 minute version, making it at least as collectable as the original issue! A top notch remastered recording, pressed on top notch heavy vinyl. A real pleasure to listen to.

Finally it’s here! The PTG Gold release of Jagg – Take Time. Check out the soundclip below: