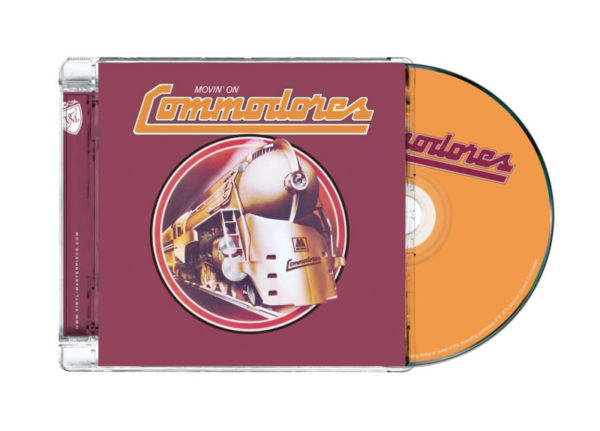 The Commodores – Movin’ On. The Commodores were an American funk/soul band of the 1970’s and 1980′. The members of the group met as mostly freshmen at Tuskegee University in 1968. They signed with Motown in November 1972, having first caught the public eye opening for The Jackson 5 while on tour. Originally they came from two former groups the Mystics and the Jays, but wanted to change the name. To choose a new name William “WAK” King opened a dictionary and randomly picked a word. “We lucked out,” he remarked with a laugh when telling this story to People magazine. “We almost became The Commodes!”

R&B purists have often argued that The Commodores did their most essential work before 1977. It was in 1977 that they crossed over to the pop/adult contemporary audience in a major way with “Easy,” and subsequent hits like 1978’s “Three Times a Lady” and 1979’s “Still” (both of which reached number one on Billboard’s pop singles charts) certainly weren’t the work of R&B snobs. Of course, Lionel Richie never claimed to be an R&B purist, although it is safe to say that The Commodores were still a hardcore funk/soul band when their third album, Movin’ on, came out in 1975. From an R&B standpoint this is one of their most essential releases.

Those who love hard, gutsy 1970′ funk can’t go wrong with horn-powered gems like “Mary, Mary,” “(Can I) Get a Witness,” “Gimme My Mule,” and “Hold On”; however, the song that Movin’ on is best remembered for is the laid-back, gospel-drenched hit “Sweet Love.” Written by Richie, “Sweet Love” is one of those secular soul tunes that isn’t really gospel but borders on it. And even though Movin’ on is an album that R&B purists rave about (rightly so), you can’t say that it was ignored by pop audiences — “Sweet Love” was a number two R&B hit, but it also reached number five on Billboard’s pop singles chart. The last track on the album, “Cebu”, became a staple on the “Quiet Storm” radio stations, and appeared as a B-side to two of their later singles, “Fancy Dancer” (1976) and “Only You” (1983).