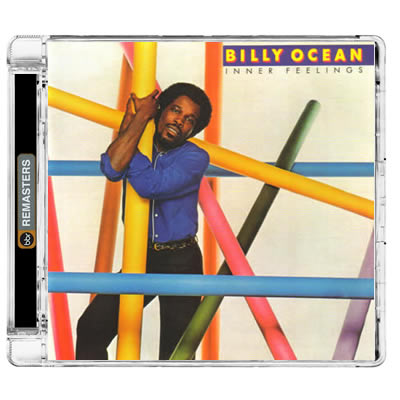 Billy Ocean was one of the most popular and successful R&B singers living in the UK during the 70s and 80s. Born in Trinidad and Tobago in 1950, Ocean moved to England at the age of 8 where after learning his trade singing on the London club scene Billy Ocean released his first single in 1972.

Four years later Bily Ocean recorded his first album and captured the #2 spot on the UK pop charts while scoring #22 on the Billboard Hot 100 chart with his single, Love Really Hurts Without You. Red Light Spells Danger returned him to the UK #2 spot a year later in 1977.

In 1982 BILLY OCEAN released INNER FEELINGS on Epic Records, the follow up to the popular, Nights (Feel Like Getting Down) album and was once again teamed with the production creativity of Nigel Martinez. Inner Feelings features the R&B hit CALYPSO FUNKIN and the sweet and soulful jam, ROCK-A-BYE-BABY along with the up beat dancer, WAS IT YOU.

Grammy Award winner BILY OCEAN attained superstar status soon after this album with hits like Caribbean Queen, When The Going Gets Tough and Get Out Of My Dreams and is currently enjoying a resurgence in popularity following the release of his UK Top 20 album THE VERY BEST OF BILLY OCEAN album and the re-release of single Suddenly.