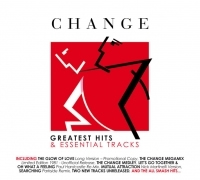 Change was an Italian-American Disco/R&B group formed in Bologna, Italy in 1979 by the creative genius of businessman and executive producer Jacques Fred Petrus (1949-1986) and Mauro Malavasi. The band had massive success throughout Europe in the 80â€™s and this double CD contains every major hit from the band as well as those mixes and tracks that are considered essential to the serious collector, including 2 previously unreleased tracks.

The digipak also includes a 32 page booklet covering the bands history. The band’s debut album, The Glow Of Love, was released in 1980 and featured the million seller “A Lover’s Holiday”. The follow-up hits from the album, “Searching” and the title song feature lead vocals by the then unknown Luther Vandross.

The three songs combined spent 9 weeks at #1 on Billboard’s Disco charts, enough to make it the #1 Disco album of the year and a million seller in the U.S. The follow-up album, Miracles, featured the hits “Paradise”, “Hold Tight,” and “Heaven Of My Life,” which, combined, spent 6 weeks at the number one spot in 1981 on Billboard’s Disco chart. With the help of up and rising producers Jimmy Jam and Terry Lewis the group re-established itself having their first top ten R&B hit in three years with the title song from their Change Of Heart album in 1984.

The following year the band released their final album, Turn On Your Radio, which featured the minor hit “Let’s Go Together.”

Soundfiles will be added soon!

01. The Glow Of The Love (long Version)
02. Let’s Go Together (The Paul Hardcastle Remix)

09. If Only I Could Change Your Mine (Previously Unreleased)